Why don't we verify networks like other complex systems? 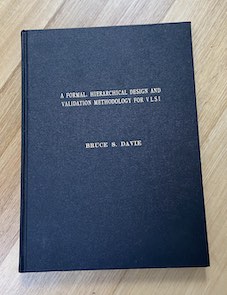 In recent weeks, I have been working with my colleagues on an update to our SDN book, including a fresh look at the future of SDN. We believe network verification will be an important part of that future, partly because recent advances in SDN provide a stronger foundation on which to base verification techniques. This line of thinking gave me a few flashbacks to my days as a PhD student working on verification in a different context. This post is on why I think verification is an essential and feasible next step for networking.

In 1984, Artificial Intelligence was having a moment. There was enough optimism around it to inspire me to explore the role of AI in chip design for my undergraduate thesis, but there were also early signs that the optimism was unjustified. The term “AI winter” was coined the same year and came to pass a few years later. But it was my interest in AI that led me to Edinburgh University for my PhD, where my thesis advisor (who worked in the Computer Science department and took a dim view of the completely separate department of Artificial Intelligence) encouraged me to focus on the chip design side of my research rather than AI. That turned out to be good advice at least to the extent that I missed the bursting of the AI bubble of the 1980s.

The outcome of all this was that I studied formal methods for hardware verification at a point in time where hardware description languages (HDLs) were just getting off the ground. These days, HDLs are a central part of chip design and formal verification of chip correctness has been used for about 20 years. I’m pretty sure my PhD had no impact on the industry–these changes were coming anyway. My graduate experience–particularly the sense that I wasn’t having a practical impact with my work–persuaded me I should do something different once I was finished. Which is how I came to work on networks. And now network verification is starting to have _its _moment, so I find myself looking back at how important formal models, languages, and verification were in computer science 35 years ago. Can the lessons from other fields be applied to networking?

Compared to hardware, and to most software development for that matter, networking is a laggard in terms of verification. Networks are generally not verified in anything like the way chip designs or large software systems are. Often the best that can be done is that a test network is used to try out some configuration changes, and if everything works as expected, the changes can then be pushed out into production. But it’s hard to capture the complexity of production environments in a test lab, and there isn’t an easy way to measure coverage–have all the possible failure scenarios been tested? Consequently, there is no shortage of reports about network configuration changes that led to a production outage (e.g., this and this).

I link these difficulties for networking back to Scott Shenker’s influential talk “The Future of Networking, And The Past of Protocols”, which I consider one of the foundational talks of SDN. (In fact I’d call it one of the best networking talks of all time, still holding up ten years later after many re-watchings.) His argument is that networking lacks the strong abstractions of many other fields in computer science, and I believe that this is one of the main reasons that verification has been a tough nut to crack for networking. Programming languages, for example, have abstractions like virtual memory that save us from worrying about how bits are stored in physical memory, while hardware design has abstractions that keep chip architects from worrying about transistor layouts. Network architects, on the other hand, have to figure out how every router should be configured to implement their policies. They have to do both the high-level design and map it down to low-level configuration of devices.

That said, I am cautiously optimistic that there is a path out of our current situation. I see a few threads of networking research and development coming together. First, the SDN future that was sketched out by Shenker and others in 2011 is starting to become reality. While we are far from a world where most networks are software-defined, there is widespread adoption of SDN across cloud providers and enterprise networks, especially when we include software-defined WAN and network virtualization systems. Among the many benefits of SDN is the fact that you can specify the desired state of the network through a central API, and the control plane is responsible for bringing about the changes to realize that desired state. Thus it becomes much more feasible to verify that a network meets the intent of its operator.

A second thread is the rise of languages to specify network behavior. Just as HDLs were essential to the specification and verification of hardware, domain-specific languages for networking such as P4 raise the possibility of verifying the correctness of networks. This is a subject that we’ve touched on in the latest updates to our SDN book, and is becoming enough of a mainstream topic to warrant its own tutorial at SIGCOMM this year.

Finally, there is the increasing maturity of network verification and validation tools, both commercial and open source. One of the realities of networking is that brownfields are the common case, so you have to deal with the diversity of device types and protocols that exist in production networks, much as we might wish everything could be cleanly designed again from the ground up. So tools that assist in verifying that networks will behave as expected have to address this complexity, with the ability to model the behavior of real-world networks. Tools such as Batfish and those of Forward Networks are getting increasingly good at this. And when we do get the opportunity to build greenfield networks, they benefit from the stronger foundation made possible by verification tools.

Arguably the biggest hurdle to proper verification of networks is the culture of the networking industry. Because networking has required us to “master complexity” (in Scott Shenker’s words) we have not always been quick to adopt techniques from other computer science disciplines that would give us access to better abstractions. I saw this play out with the early struggles to get the industry to accept SDN, and I believe we need to do the same in pushing for more adoption of verification approaches that are mainstream in other computing fields.

Bruce Davie is a computer scientist noted for his contributions to the field of networking. He recently co-founded Systems Approach, LLC, to develop open source computer science educational materials. He is a former VP and CTO for the Asia Pacific region at VMware. He joined VMware during the acquisition of Software Defined Networking (SDN) startup Nicira. Prior to that, he was a Fellow at Cisco Systems, leading a team of architects responsible for Multiprotocol Label Switching (MPLS). Davie has over 30 years of networking industry experience and has co-authored 17 RFCs. He was recognized as an ACM Fellow in 2009 and chaired ACM SIGCOMM from 2009 to 2013. He was also a visiting lecturer at the Massachusetts Institute of Technology for five years. Davie is the author of multiple books and the holder of more than 40 U.S. Patents.